I’m so excited to share this amazing repurposed project with you!  It’s the fruit of a lot of labor {none of it mine … smile}.  One of my friends took our old, almost-unused playhouse that my kids had outgrown and repurposed it into a fabulous DIY chicken coop! that has so many amazing features.  Want to see all the details? 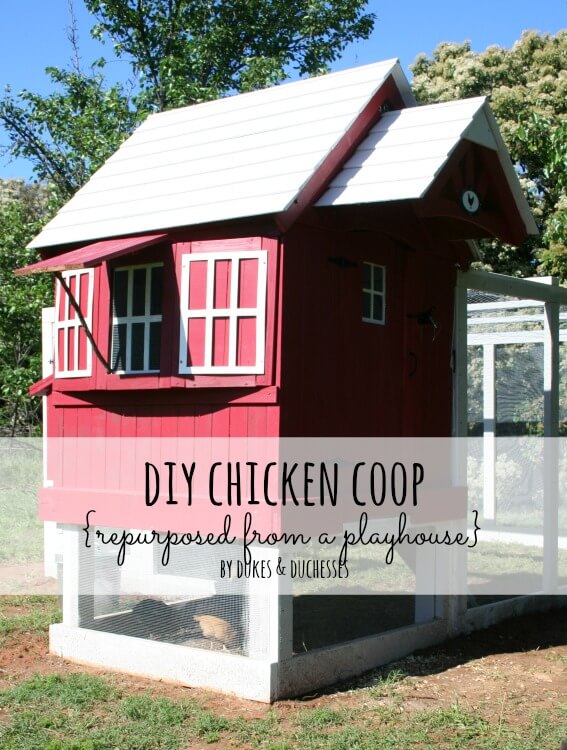 The house started like this.  If you’ve been around Dukes and Duchesses for a pile of time, you may remember that I won it in a facebook voting contest.  Over the years the playhouse had weathered and the kids had been playing in it less and less.  I loved the idea of repurposing it into something else. 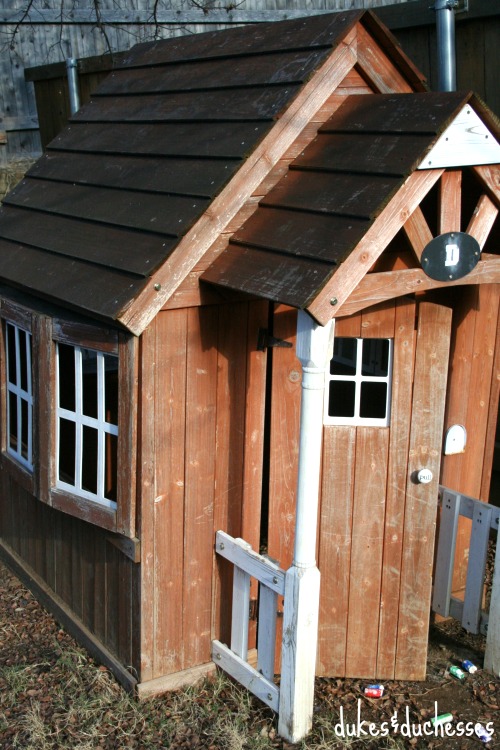 My friends did a pile of research, found ideas and inspiration online, and then added their own touches to create a really amazing spot for their chickens {and something that looks great on their property}.  They painted the house a deep red and painted the trim white …

… and added a latch to the front door with a carabiner to act as a lock.

The old playhouse had an emblem on the front with a monogram that I had added.  Kim covered over the monogram with a chicken sticker  that she bought online and it couldn’t have been a better fit.  It adds such a cute, personal touch.

After some research, the inside of the chicken coop was whitewashed.  A true whitewash is made with hydrated lime and water {and sometimes salt}.  While it isn’t permanent and will have to be reapplied periodically, it works well to seal surfaces, repel insects, and prevent bacterial growth.

A ladder was placed inside and the chickens roost and sleep on it at night.  The opening at the back of the coop is the nesting box.  It’s blocked off right now but when the chickens are old enough to start laying eggs, that area will be opened up.

… hangs inside the coop and allows the chickens to get clean water throughout the day.

The chickens can enter in and out through a small side door that leads into the run.

A ramp leads out of the opening and the chickens can walk down into the yard.

The entrance stays open during the day …

… but at night, a pulley system lowers a door down to protect the chickens and keep them inside. 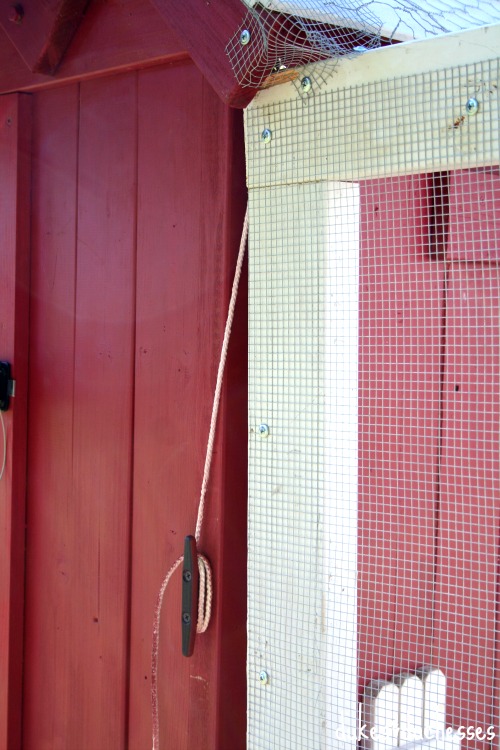 The nesting box is built onto the back with a hinged lid so eggs can be easily retrieved each day.  The same carabiner system keeps it closed and locked.

The side windows of the playhouse were closed off with the exception of the middle window that was left open but covered with mesh wire.

Hinges allow the window to be closed as needed but opened for ventilation.

The hinged window is held open with a stick.

A large yard attached to the chicken coop allows the chickens to wander while protecting them from local predators {barn cats, raccoons, snakes, bobcats, hawks}.

… and the entire run is caged in with thick metal mesh and wire.  Mesh runs across the top as well as along all of the sides and it also goes a foot underground all the way around to stop animals from being able to dig under and in.

… but stays closed during normal operation.

The chicken run was based on plans by Ana White and altered for coop size and gate access.

So far, the run is working well at keeping the predators out although the chickens don’t seem too bothered by the cats that like to hang around.

What do you think?  Isn’t it just an awesome DIY project?

This DIY chicken coop turned out better than I could have imagined and I’m so thrilled to see our old playhouse turned into something completely functional and fun.