Last month I started a new Back to Basics series at Dukes and Duchesses.  Each month I’ll share a traditional game and a coordinating DIY project.  This month’s traditional game is hopscotch and I’m sharing a recipe for homemade sidewalk chalk!

I remember playing hopscotch a lot as a kid but my kids rarely play it.  It’s such a simple game, requiring almost nothing, and my girls had a lot of fun playing it this week.

To play, simply draw a chalk grid {like the one below} on the sidewalk. 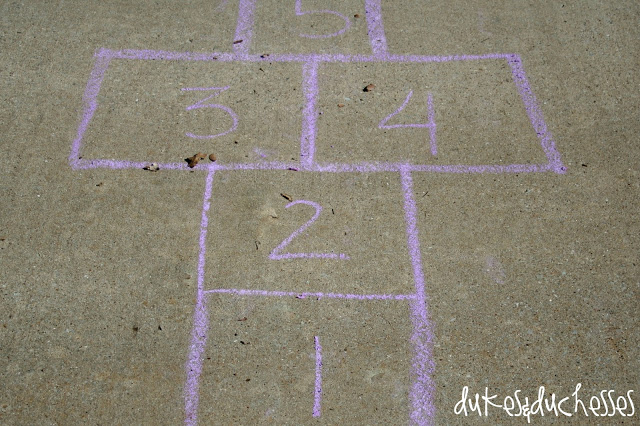 Throw a small rock and let it land on one of the squares.  Hop {on one foot for the single squares and landing on two feet in the side-by-side squares}, jumping over the square containing the rock.

Scoop the rock up as you hop back to the starting point.  If you lose your balance or step on the lines, you’re out.

Simple and fun, right?  And even more fun if you draw the lines with your own homemade sidewalk chalk!

To make your own sidewalk chalk, you’ll need Plaster of Paris, powdered tempera paint, water, and a mold of your choice {this time around I used cupcake wrappers in a muffin tin but I’ve used fun molds in the past}.

Mix 1 cup of Plaster of Paris with 1 cup of water.  Stir well {I use a whisk} until the lumps are gone and then add tempera paint powder until you have the color you want.

Pour into your molds.  Just a note: this photo shows paper cupcake wrappers but I would only recommend using foil cupcake wrappers {without the paper inserts} … they peel off more easily at the end.

Let the chalk dry until hardened {at least 12 hours} and then remove the chalk from the mold and let it continue to dry for at least 24 hours {I placed mine on a baking rack so the air could circulate around the chalk}.

That’s all there is to it … a simple recipe to make your own sidewalk chalk!

Do your kids know how to play hopscotch?
Don’t miss the first post in this series:
How to Play Jacks