This snowman on a stick post contains affiliate links.

Yesterday I took these adorable snowman on a stick donut treats to Luke and Lila’s kindergarten class party and they were a big hit!  They were really easy to make and looked so cute.  They’re the perfect treat for a winter party!

These snowmen on a stick were inspired by the cute snowmen at A Little Tipsy but I made a couple of changes to them.

How to Make a Donut Snowman on a Stick

To make these cute snowmen, you’ll need the following ingredients for each snowman: three mini powdered donuts, an orange Mike and Ike, another Mike and Ike candy in any color, fruit roll-ups or fruit leather in any color, black food coloring or a black edible marker, and a long wooden skewer.

To make each snowman, carefully slide the donuts onto a long wooden skewer {if the donuts aren’t fresh, they may split when you slide them on but sliding them very slowly will help}.

Poke an orange Mike and Ike into the hole in the top donut to make the nose then cut a green Mike and Ike in half and poke it into the other two holes to create the buttons.

Slice a piece off of a fruit roll-up to make the scarf.  Wrap it around the snowman, in between the first and second donuts, and cross it over itself.  You could even use a pair of kitchen shears to add a little fringe, if you wanted.

To make the eyes and the mouth, draw dots on with an edible marker or dip a toothpick in black food coloring and gently touch the tip of the toothpick onto the donut.

These little snowmen are really quick to make and an entire batch can be whipped up in no time, especially if you set up an assembly line.

How to Transport Donut Snowmen to a Party

If you’re transporting the snowmen to a class party like I did, just stack them carefully in a 9×13 pan, alternating the directions they’re facing.

If a 9×13 pan isn’t large enough for the number of snowmen you have to transport, lay them carefully in a shallow box.

How to Make Snowman Juice Boxes

Want another quick and easy snowman-themed treat for a winter party?

The kids at our kindergarten party loved these snowman themed treats! 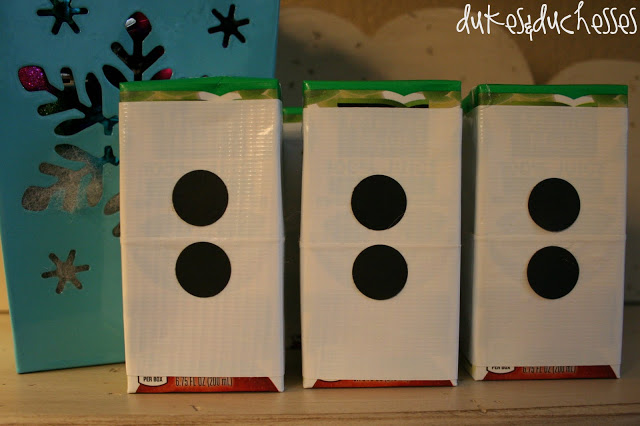 Kindergarten is so much fun!

For more fun Christmas ideas for the kids, be sure to check out this idea for melting snowman floats, a fun idea for a holiday party…

… and a fun and festive Santa tablescape for the kids!