It’s just a few days till Halloween and if any of you are panicking about not having costumes ready, I have a super simple costume idea that can be whipped up in less than an hour: a no-sew DIY Peter Pan costume!  With Pan recently hitting the theaters, I have a feeling we’ll be seeing a lot of kids in green this Halloween. 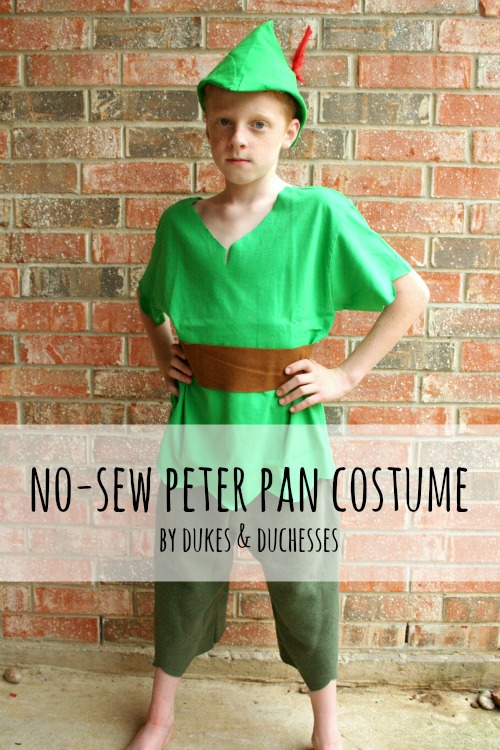 This costume could not be easier!  To make it, you’ll need a green shirt and green or brown sweatpants {Walmart is a great place to find cheap clothes}, a red feather, and half a yard of brown felt fabric and green felt fabric.

How to Make a No-Sew Peter Pan Hat

Start with the hat.  To make it, cut a large semi circle out of green felt fabric.  The size you’ll need will depend on your child’s head but for a nine year old, I cut a semi circle just a bit bigger than my largest pot lid.

Fold the straight edge in about an inch and tack it down with a bit of hot glue.

Fold the circle in half along the flat edge and glue it together, making a seam that will run down the back of the cap.

Fold up each side of the hat …

… making an almost-point at the front …

… and attach a feather to one side.

How to Make a No-Sew Peter Pan Costume

Prepare the shirt next.  Using shears, cut a zig zag pattern along the bottom of the shirt and at the base of both sleeves.  Wherever you cut across a seam, keep the seam from unraveling by placing a dot of hot glue on the threads.

Cut a v-shape around the neck of the shirt and add a small slit in the front center.

Prepare the pants by cutting a zig zag pattern on both legs, shortening them so they come to mid-calf.

Make a belt by cutting a wide straight piece from the brown felt, making it just long enough to wrap around your child’s waist.  Hot glue velcro pieces onto the ends and secure it in the back.

That’s all there is to it!  It’s such a simple homemade Peter Pan costume and looks so cute!  My little guy can’t wait to dress up on Halloween and fly off to Never Land.